My Experience with Elizabeth Gilbert (that she doesn’t know about)

By: lindsay
In: Uncategorized

Well, I’m happy to report that I stumbled my way into a Failure Week success! Failure Week, as you may recall, was intended as a way to shift my intention away from achievement and the valuing of outcomes, and back towards risk taking and the valuing of the process. Failures are viewed, in Failure Week, as a victory – a sign that you’ve pushed yourself to take a leap, and you’ve had an experience you can learn from. Yup, that happened. It was uncomfortable in so many ways. And I guess that’s the point. Ok, so here’s what happened.

But I’ll back up.

I am a big fan of Elizabeth Gilbert, author of Eat, Pray, Love and Committed: A Love Story (among other titles), both of which I see as ultimately being about her journey towards authenticity. My favorite theme! In the first, she figures out how to leave a marriage to follow her authentic self, and in the second, she figures out how to get back into a marriage in a way that still feels authentic. More recently, I’ve been following her on Facebook where she posts daily inspiring and amusing messages. I love the cross-over in the themes we think about. Similar ideas seem to make us tick, and I feel a kinship from afar, like we have a comparable vibration and sense of mission. (Even just saying that “out loud” makes my insides squiggle, just so you know. I worry it sounds arrogant or presumptuous, possibly even delusional. That’s a little precursor to where this story is headed.)

So, for the last few months I have had this fantasy of reaching out to Elizabeth Gilbert via Facebook. I want to say something like, “Hey! I just wanted to introduce myself and say that you and I think about and try to communicate with the world about some similar things. I find connections like that inspiring, and I hope you might, too. Check out my stuff online if you’re curious, and reach back if you are drawn to!” Seems innocuous enough, right?? WRONG!!! Terr-i-fying. But it was Failure Week…the week to take chances without worrying about the outcomes. So I tried. 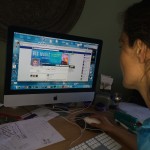 I wish I had a video of myself. What you would see is me staring at the computer screen. For a long time. And then writing a few sentences. And then deleting them. And then staring at the computer screen again. And then staring at her Facebook page to figure out where I would post something, and whether other people post things to her page, and whether she writes back, and what her tone is when she writes back. And then you’d see me writing a few sentences, again. And then deleting them. And then questioning the grammar. I mean, can I end my message with a dangling participle?! I’m writing to an author, after all! She WILL see the dangling participle. But if I say, “…write back if you are so drawn,” then it just sounds self-important and overly formal. So I abandon the writing and start playing with my own Facebook page, instead, to try to figure out where a post would show up and whether it would be private or public. I wish I could find a way to make it private!  And then I text my friend Alice, The One Without Whom I could Not Be Me and The One Who Has A Saint’s Tolerance for Interacting With Me in Neurotic Moments. You’d see me reading her my three sentences and asking her seven questions about how they sound, and you’d see her patiently thinking it through with me as if I’m not off my rocker.

I’m not kidding, this went on and on. I tortured myself. I used up what was preciously protected creative time on this agonizing process. I’m sure it would have been hysterical to behold. But probably even more interesting than watching this in video action would be hearing an audio playback of the monologue inside my head. It sounded something like this:

“Her followers don’t want to see a post from me, they come to see Elizabeth Gilbert’s posts! It’s like an embarrassingly unwanted photo bomb! But other people post, and it doesn’t seem strange. So maybe mine wouldn’t, either. But maybe mine will seem opportunistic, like I’m somehow trying to cash in on Elizabeth Gilbert’s hard earned audience. Or I might sound delusional, like Hugh Grant’s sister in Notting Hill when she first meets Julia Roberts’ character (a movie star from America) and declares with her crazy hair and bugged out eyes that she has always felt a kinship with her and suspected they would one day be best friends. I don’t want to be Hugh Grant’s sister in Notting Hill!!! But on the other hand, Elizabeth is just a person, too (see, I’m on a first name basis with her, now!). And maybe she really WOULD feel inspired by connecting with someone who shares some vibration with her. And maybe, just maybe, it’s ok to be big and take up this space, and maybe, just maybe, it won’t actually inconvenience or offend or upset anyone, at all!” And besides, the worst thing that can happen is nothing will happen, right? And Liz (she and I are getting closer and closer, see?!) is a proponent of taking leaps and reaching out into the world and being brave, so if she could watch this video of me agonizing I think she would giggle and say, “Send that message, soul sister!!! (I KNEW we’d be soul sisters!)

Can you feel the momentum building? I felt it!! It built and built until that tape in my head sounded like a cheerleader and I finally hit POST!!!!!! Hahh hahahh!! Victory!! Ummmm. Right? 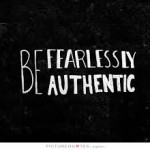 Well…no. Because the post NEVER APPEARED. As any of you who have read my Facebook page know, I am a newbie in all things technology, so I have no idea what I did wrong, or maybe it was just the universe making a point. But that damn post, those three sentences I agonized over, disappeared into the ether. Which was perfect. Because it forced me to look at the PROCESS I had just been in, instead of judging the experience based on the OUTCOME (of which there was none).

So I took a breath and asked myself, “What the hell just happened?” And I re-heard that audio tape in my head, and this line stood out: “…maybe, it’s ok to be big and take up this space, and maybe, just maybe, it won’t actually inconvenience or offend or upset anyone, at all.” That’s when it hit me. This was a very important and agonizing victory of a failure, because it brought me face to face with the demon this whole blog journey is about: the fear that we have to stay small in order to protect others from a bigness and brightness that might not be ok for them. That fear is deeply engrained for me. For many. Have you ever found yourself dressing down so you don’t look too good? Or trying not to laugh too loud? Or deciding not to speak up in a class or a meeting? Do you ever worry pride will look like superiority, as if one can’t have pride and humility at the same time? Do you fear confidence will look like arrogance? Or talent or skill or the success that comes from hard work will look like presumptuousness or egotism? Do you worry you will be judged or attacked for your brightness, or that by owning your space you smoosh someone else out? I hit all of that in this process. I was afraid to own my light in case someone else found it offensive or intrusive or arrogant or presumptuous. 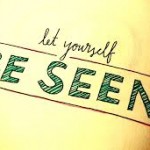 But I started this blog adventure because I want to debunk that message that gets slow-dripped into our veins. Because I believe IT’S BACKWARDS! I know I’ve said it before, but this is my core message and it needs to be said again and again and again. When we take up our space and we own our brightness and we shine like the amazing creatures of the universe that we each have been created to be, then we step into our purpose. Then we give the most back to the people around us, and to the planet, at large. That’s why being our authentic selves is the most compassionate thing we can do. Authenticity doesn’t endanger others; it’s a gift. That’s what this Compassionate Authenticity journey I have started is all about. I prefer the easy and expansive and glowing experiential reminders of this, but Failure Week gave me a chance to learn from the shadow side of experience, too. And we have to do that. We just have to. That’s where so much of the learning happens.

So, thank you Liz, my soul sister, for having this intense victorious failure of an experience with me. You’re the best BFF ever!! 😉 Your buddy — Linds