By: lindsay
In: Uncategorized

When I started writing a couple of months ago, it felt GREAT. I felt inspired, empowered, playful, and revitalized. I eagerly and gleefully carved out time to write like I was stealing cookies from a cookie jar. By the time I had posted my third entry, I had four additional entries mostly written and ready to go, and about nine other idea seedlings jotted down and germinating. And then…I stopped. I waited patiently for myself to pick up the pen, again. Thanksgiving came and went, Christmas came and went, New Years came and went…dagnabitt, the whole winter season came and went! I noticed the rising self-critical voice that wanted to say things like, “See, I knew you wouldn’t follow through,” and “See, I knew you couldn’t do it,” and I just tried to stay patient and curious. And then I realized – this very experience had to be the subject of my next entry. So here we go! Back in the saddle.

So…what knocked me OUT of t 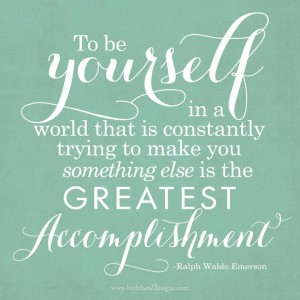 he saddle? What can I learn from this about the forces that block our creative flow and quiet our voices, even when we can hear the pulse of our own creative energy behind the wall? I, like many people, often point to time deficiency as my prominent creative barrier. Ok, yes, the holiday season got in the way of my routines, and yes, some extra work responsibilities popped up that took precious time. But having finally succeeded in MAKING the time to write, I now couldn’t deny that I had simply stopped making the time. I could feel there was a force at play more interesting than time. When I thought about sitting down to write, it didn’t feel light and playful, anymore; it had started to feel weighty and serious. Something was blocking the fun. I realized I was feeling the paralyzing force of EXPECTATIONS!!! Creation happens in the light, and expectations are heavy, man.

Story time. In my first year of college, I took a leadership role in a student activity group whose mission was to educate the student body about health issues, primarily around safer sex, date rape, and drug and alcohol abuse. We had a great year, full of creative risks that led to big pay-offs. By the end of the year we were presenting to groups of about 500 people, we were facilitating lively and thought provoking conversations, and we were training groups from other schools who wanted in on our model of education. It was AWESOME. Just like when I started writing this blog a couple of months ago, I felt inspired, empowered, playful, and revitalized.

And then something happened: I was recognized for my work. I received accolades and awards. I was given the highest honor available to first year students at the college for leadership and community enhancement. It was presented to me at a formal ceremony in front of the school administration, and I will never forget the words the Dean of the College spoke at the ceremony: “The eyes of the college are upon you, and we are expecting great things.” The balloon I was riding high in suddenly got very heavy and serious and promptly thudded to the ground.

And that was it. I dropped out of the group. And I didn’t really do anything else that might catch the eye of the Dean of the College. Those words, “…we are expecting great things,” took the fun out of it all. Or, more accurately, I allowed them to take the fun out of it all. In retrospect, I see that I could’ve chosen to simply have fun being acknowledged without internalizing the external expectations that were being placed upon me. But that’s pretty advanced stuff. I wasn’t ready to be that differentiated. What happened, instead, is that I stopped focusing on the gratifying creative process and camaraderie of the group, or the educational mission that had inspired me in the first place. It became about the pressure to prove myself worthy of the expectations; it became about living up to some externally created version of greatness; it became something I would have been doing to please someone else; and it suddenly became something at which I could fail. That made it feel serious instead of fun.

This experience came rushing back to me as I considered why I had put down my blogging pen. In order to start the blog, I had given myself permission to simply write – not to worry about how good it was, not to worry about whether or not anyone read it, not to worry about what I would DO with the articles. Just write. Just let it flow. Just have fun! And low and behold, it felt free and creative and expressive. It was something I was doing for me, to enjoy the process, to help me shine my own light, and in honor of a deeply held sense of mission. But as I got rolling, I robbed myself of that freedom and flow with THE EXPECTATIONS MONSTER. I started thinking things like, “Geez, I better make sure the next one is as good as the last one!” And, “I HAVE to keep writing, I CAN’T lose momentum!” The expectations monster and the critical voice went into business together, and I became estranged from my muse.

Now, I know that the Dean of my college and my own inner voice are not acting alone. We live in a culture that values external achievements. We identify with our occupations – we ARE what we DO. And many of us strive for success, which we generally define by an outcome.  Sadly, in the face of these expectations, we sometimes reign ourselves in, creatively, afraid to make mistakes that would lead to failure. Once we’re reigned in for safety, we can’t really succeed. As the great Wayne Gretzky famously said, “You miss 100% of the shots you don’t take.” 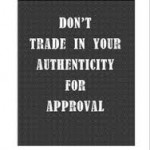 Gretzky is right. But there’s more to it, than that. It’s not just that we can’t “succeed” if we don’t try…it’s that the real success IS IN THE TRYING. The thing that makes us really light up and come alive, the thing that allows us to share our gifts with the world, isn’t achievement. Being fully alive is not defined by an achievement…it’s a process — whatever process makes you feel inspired and alive is your source of you-ness. Being authentically and joyfully in that process is the real success. And while this may sounds contradictory, the truth is that being in that process, whatever it happens to be for you, won’t always feel inspired and alive or easy and fun. And that’s ok, too. That’s good. That’s part of the deal and how we learn and grow. When we value the outcome over the process, then those times of struggle look like failure, and we lose track of the learning available in our pain and confusion along the way.

Liza, my older daughter, introduced me to the following fabulous story she found in a student online newspaper. Fettes University, an elite prep school in Edinburgh, noticed that their students were racked with anxiety and stress. They were driven by a fear of not living up to the high expectations held of them, and they were, as a result, not willing to take academic and creative risks. The wise adults on the scene knew that this was a recipe for disaster, and that their high expectations, which the students had dutifully internalized, were backfiring. Real learning can’t happen without risks, real wisdom can’t be found without failure, and real creativity can’t be shared and discovered if the flow is blocked by fear. So you know what they did? They instituted Failure Week, in which kids were actively encouraged to try new things and take risks and make mistakes without concern for the outcome. They were encouraged to fail, as it would be sign of diving into the creative process. Yeah, I know, a week is not much compared to a lifetime of high expectations. But it’s a start. Or at least a conversation starter.

So, I’m instituting my own Failure W 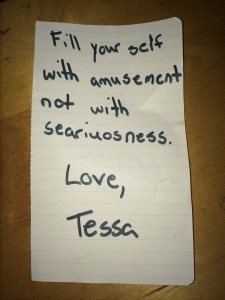 eek. I’m choosing to side step the Expectations Monster that reared up, and I am putting my Beginner Mind back on – the mindset of open eyed curiosity, risk taking and learning. I give myself permission to make mistakes. I choose to be open to the flow and embrace the process without being paralyzed by concerns for the outcomes. I want to be in it for the experience of the process, not for the final achievement. And I choose to approach my work as play, with amusement and ease rather than weight and seriousness. Amusement, after all, is the highest vibration we can experience. And I can’t think of a better vibration from which to create. Thus this very wise reminder I found on my desk from my younger daughter. Thanks for the reminder, Tessa.

2015-03-23
Previous Post: Finding Your Yes
Next Post: My Experience with Elizabeth Gilbert (that she doesn’t know about)